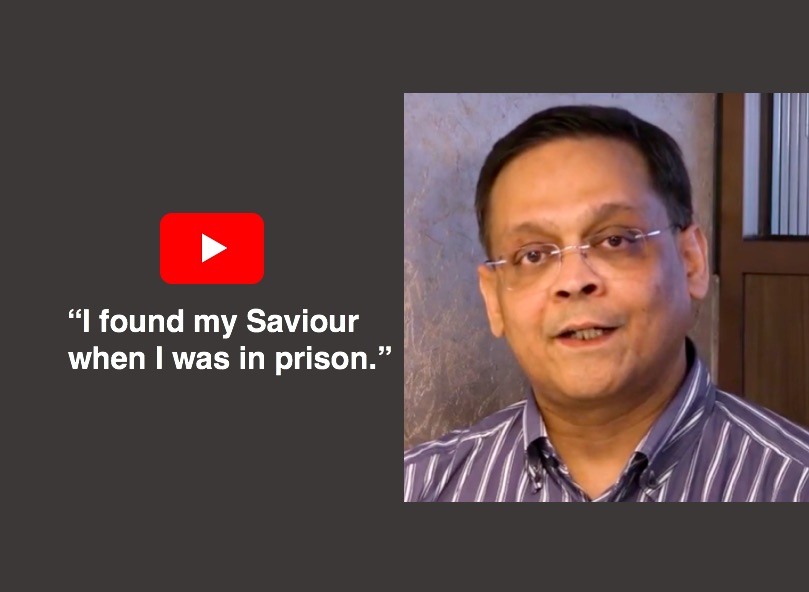 Navin tells us about how he became a follower of Jesus during a prison sentence and the grace he received along the way. He testifies that Jesus will help anyone who seeks Him with all their heart. There is no shame or crime that God will not redeem for HIs glory. Praise God! Watch his testimony.

I think the pre-prison Navin, life was centered around himself; he didn’t know God, he wasn’t relying on God.

The post-prison Navin, even though I might be rushing around, I actually know deep down that He is my 大老. I need to listen to Him.

I’m Navin and I’m 54 years old. As you hear my story, you would realise that this draws parallel from the story of the return of the prodigal son, which ultimately is a story about Lord Jesus’ ongoing grace and love.

While I may have extensively looked as if I had a very good career going on, I dug a huge hole for myself through my addiction of gambling and in order to pay the gambling’s debts, I had stolen a lot of money from clients and other people. I was at a real dead end. I felt I’d just gone and trapped myself and I didn’t really have a way out. So, which is why this kind of continued on and on. The mess that was created was, was very significant

This whole episode led to a very long prison sentence. My family, my friends and colleagues were truly very disappointed.

So if this were a film, it would have ended with me being in prison, the villain in this case, and that would be the end of that film. As it turns out though, going into prison was the beginning of a new story or rather, a new life.

After being in prison. I tried to find out more about myself. Even though I’ve been a Hindu all my life, I didn’t really know much about it. And I tried really hard to understand more. I read the (Bhagavad) Gita, I even read books on the karma and even Buddhism. But, having read all that, I still couldn’t quite understand what was really going on. Something was just simply not connecting.

After being in prison for a few years, a couple of Christian friends suggested that I should read the Bible. I had tried to do that in the past, but I only read a couple of pages and put it down. But this time, I was really able to read it and I was actually connecting quite well to the stories and understanding them – so much so that after reading the Bible, I was ready to willing to turn to the Lord Jesus.

I was in my cell and I asked the Lord Jesus, whether it would be an impediment for me to turn to Him as a Hindu or as an ex-Hindu.

And soon after, after a few minutes, I felt a prompting telling me that, “That’s only just part of your ancestry,” and that He didn’t see it as an impediment at all.

After I turned to Him, I felt a change in me. I felt a lot calmer and I actually felt loved. I also felt the prompting from the Holy Spirit, which was quite amazing. Lord Jesus is truly a living God.

This form of communication and being prompted by the Holy Spirit was a truly eye-opening feeling for me.

As a Hindu, we never really felt, at least I didn’t, I didn’t feel any connection with the gods as such but this time, I was truly able to ask questions and even get answers back. And that really was a start of a transformation in my life.

As I got to know Lord Jesus more, one of the messages that I received was that He’d been the One who sent me to prison. In hindsight, it really was a place of refuge for me. It was also a place that I could get to know Him more with minimal distraction.

Through the assistance of the prison ministry, I got baptized in prison. I also realised though, as a Christian, it’s not without its challenges.

While I was in prison, my only connection with the outside world was through the visits that I had from the family members. But, one of the challenges was one of them became very, very ill. Based on the doctor’s diagnosis, it was hard to tell when a recovery would actually start to occur. And for about a 10-week period, I really had no visitors, no connection with the outside world. I truly felt isolated and cut off.

It truly was a miracle that in about 10-weeks time, she felt much better. She was actually able to come and visit me. I started to feel that the Lord had really guided this through and I really thank Him for what He had done for us.

While I felt cut off, I felt that the Lord Jesus was still with me. He was the only One that I could truly lean on at that period of time.

And that was the time when I felt a stronger level of bonding with Him.

Soon thereafter, I was actually granted parole, which in itself is truly, is a miracle too. But that’s not without its challenges though. It means that I had to face the outside world, the family and friends. And given the magnitude of what I had done, this wasn’t an easy thing to get over, but luckily with the Lord’s help, He really gave me strength. And as I came out, I also realised that He’d placed a lot of good people around me in my life. I had a friend who gave me the job and the other friends were very supportive and also helped me with other things.

It’s been three years since I’ve left prison. And during this period of time, I feel distracted, rushed, and very often not paying attention to the prompting from the Holy Spirit. I feel guilty about relying on my own strength and easily making judgment about people and things, but despite all this, I still feel loved by the Lord. I know I need to not rush myself. I need to change, but that transformation is an ongoing process.

What is clear is that He’s really welcomed me like He’s welcomed the return of the prodigal son.

And that feeling is hard to describe in words. It’s an amazing miracle that He had done in my life. And through that, you can see that there’s no shame, that He can’t cover. There’s no sin that He cannot help you to deal with. You just need to really focus on Him and ask Him for help.

I felt I’d just gone and trapped myself and I didn’t really have a way out. So, which is why this kind of continued on and on. The mess that was created was, was very significant. This whole episode led to a very long prison sentence. My family, my friends and colleagues were truly very disappointed. So if this were a film, it would have ended with me being in prison, the villain in this case, and that would be the end of that film.

As it turns out though, going into prison was the beginning of a new story or rather, a new life.