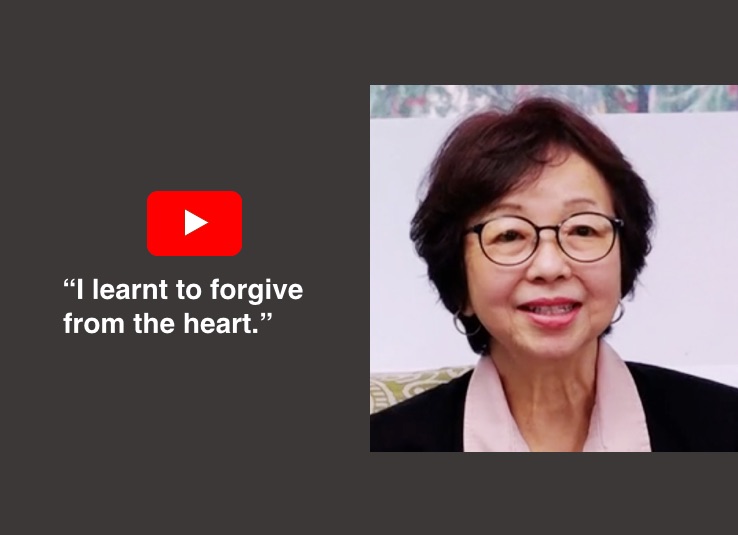 Joyce shares about her journey of receiving God’s healing of her heart, her eczema, and her relationships through prayer and repentance. Praise God!

I noticed after the letter was given to them, my children and I began to communicate in a completely new way.

We’re being authentic instead of putting problems under the mat, which we had been doing for so many, many years.

Hi, my name is Joyce. I’m originally from Penang, Malaysia. I started becoming a Christian from the mid 1990’s. And this happened just as I walked away from a very unhappy 17-year-old marriage. At that time, I bumped into my ex-classmate, let’s call her Shirley. And she wanted to tell me about Christ as a personal Saviour. I resisted and I told her, “I don’t need religion. In fact, I’m just about to start a new chapter of my life and I was going to take control of it completely.”

But God pursued me with a passion. And I ended up going to church and Bible study.

My former husband had a very senior position and we lived a high-profile life of constant parties, very comfortable lifestyle. So, looking at it from the outside, I had probably a lot of things that people would wish for themselves but deep down, God knew that my heart was aching, and a lot of hurts I felt as a child were all coming back.

It impacted the children as well because we all pretended nothing was wrong. We never confronted him. On top of it, I couldn’t talk to anybody else about the women that he was seeing because of his position.

So, I just had to suppress it all down in my heart.

And this became so difficult for me that I knew I had to walk away from the marriage, even though I felt very guilty that this might affect the children in material terms later on, but my survival was at stake.

So, I became a Christian – an exciting new chapter of my life – and I wish I could have done it much earlier. I have to admit though, that while it gave me an amazing new identity, a new purpose in life, the journey itself wasn’t very smooth. God showed me along the way that there were wounds and scars left from the past and these things may not automatically go away. So, they were trying to manifest themselves, even in my early years as a Christian.

When I go to church on Sundays, I find myself crying a lot. The tears are usually brought on by the worship music.

I feel that it is God’s way of cleansing me. I visualise the tears as a stream of detergent that God uses to cleanse away the years and years of dirt and dust and grind. It doesn’t take one instance, but it takes a bit of time.

One Sunday, I was in this church and at the end of the service, the prayer team started inviting people to come forward. I was not intending to do so, although I thought about it.

And then what happened was a friend, who was sitting at the back, walked up to me and pat me on the shoulder and whispered, “I think you want to go.” So that confirmed it. So, I started taking steps towards the front. There was a lady there and she started praying over me. But she suddenly came up with a sentence that really went deep into my heart. She said, “You have not forgiven someone.” I replied to her, “I have,” and I imagined in my mind, in a very self-righteous way, that I had not insisted on alimony because he was going through a rough time.

But she said, “Yes, you have forgiven him with your mind but not your heart.”

And I was a bit surprised at that. So, I asked her, “How do you forgive with your heart? Really forgive.” And she said, “You bless him, you pray for him, and you think well of him.” So, I tried to do that as best I can and before I knew it, I had collapsed and was on the ground. What surprised me was I’m normally someone who is very conscious of how I look on the outside, but I found myself so comfortable on the ground, that I decided I would just stay there. They put a blanket over me, but it was not the blanket they gave me the warmth.

I felt a warmth and a love I had never experienced before and I just decided to savour the moment.

I think it was my first experience of soaking in God’s presence.

Then I decided it was probably time to get up and I got up and what surprised me again was that I felt such a big load lift from my shoulders, and I was smiling and wanting to hug the people that were waiting outside for me.

Every time I hear about or experience God healing me, of Him putting out His arms towards me, then I feel very emotional. Because I think it’s like a balm to my spirit and it’s something I probably haven’t heard a lot in the past. But I’m so glad that it’s happening now. Better late than never.

At that time, I had eczema, a very severe form of it, caused by my auto-immune system attacking itself, and the doctors couldn’t do anything. Then six months later, I bumped into an old friend and she said inner cleansing was needed for a condition like that and asked if I was willing to have her pray for me. So, I thought, why not?

I filled in the form that was required, where I had to confess previous sins way back in my childhood and my former marriage, and I just realised that it was a lot of things I needed to confess.

So, she prayed over me in one session and my eczema has not come back, and I am eczema free. Praise God.

In 2016, God again caught my attention in a very surprising, exciting way. I was in California doing quiet time in my bedroom. Suddenly, there was a message flashing in front of me and its content was surprising, “Write a letter to your children.” I knew it could not be from me and I knew what the contents of the letter needed to be.

So, I wrote the letter. I gave a copy to each of the two children, who must have been quite surprised. Anyhow, I’m happy to say that since the letter, we have begun to speak in much better ways of communicating. We are real and we speak from the heart.

So, I know that this is just a beginning of a new chapter in my life with my children that God has prepared for me.

In conclusion, I am convinced that the good work that God has started in me all these years since I became a Christian, He will bring it to conclusion.

As for you, take heart, those of you who can relate to any part of my story, I really encourage you to allow Him to transform you as well; to bring your pain, your hurts to the foot of His cross. If He can do it to somebody like me and give me a 180-degrees turn, I’m quite sure He can do the same to you.