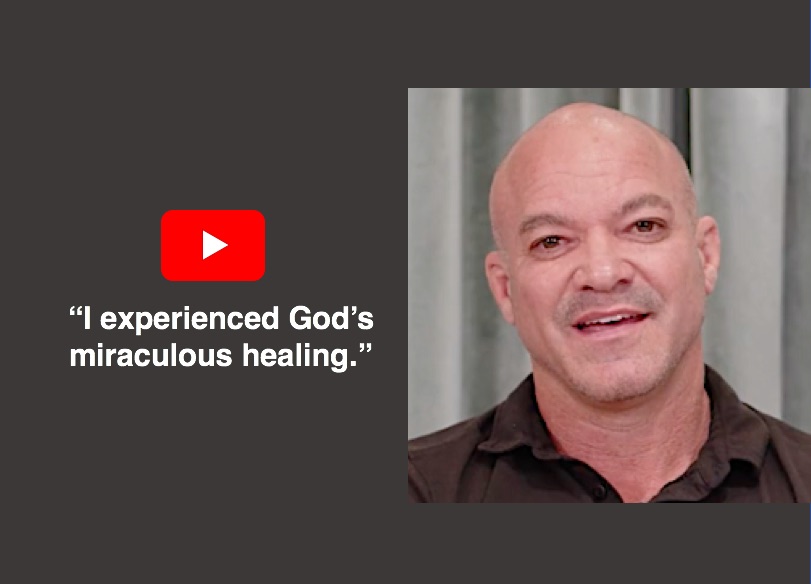 Mike describes how God saved him from a life on the streets and how God encouraged him one day by miraculously healing the torn labrum in his shoulder so he didn’t need surgery anymore. Praise God! Watch his testimony.

I want to encourage you with these words as well, that even though you might start out kind of crazy in your life, God can use that.

My name is Mike Powers, and I am a Brazilian Jiu-Jitsu black belt professor and a multiple-time champion. I’m three-time US champion, Pan American champion and I’ve gotten third in the world twice.

I originally grew up in California, in San Diego, beautiful, by the beach and all that, and my mom had me when she was 16 years old. I never met my real dad. And (0:39 MUTE “eh”) she was kind of raised, both of us, by my grandpa and grandma.

My mom developed a chemical imbalance, paranoid schizophrenia, and for years, she struggled with that.

And the doctors back in the earlier days, they didn’t have medication down as good as they could have, and they actually made her more out of her mind. And she spent the next ten years basically (1:07 MUTE “eh”) struggling with this, was suicidal, (1:10 MUTE “um”) she was in and out of mental institutions.

Even though she was kind of like struggling with this, she knew God and she would take me to church, and I was five and she prayed with me to receive Jesus. I remember the moment.

I kind of raised myself in many ways and the streets were my friends.

And from 12 to 18, I got arrested five times and I got arrested for stealing. I stole the gun from the store called Target. I had a gun in my car as I was 16. Later, I pulled a gun on someone, just messing around, got arrested and stole wood for a skateboard ramp, underage drinking, just dumb stuff.

And about 18 years old, my surfboard shaper invited me to a Bible study, and I hadn’t been to Bible Study in church in years. And I loved Tim, he was a great guy. So, I went to this Bible study with some other young pro surfers and amateur surfers and the team for Rusty – I surfed for Rusty and DC shoes – and he started to read the Bible. He started to sing these cheesy little songs that I remember from church and I didn’t say anything but I remember thinking, “This is what I was raised on, you know, this is what I need to go back to.”

And so, I stopped. I was partying, doing drugs, not bad but doing stuff, sleeping around, cussing, doing just kids’ stuff. And I decided that day I’m going to stop all of this. I’m going to give my life to Jesus again, and I’m going to follow him with all of my heart – and I did. I never went back from that time. And since then, I became a youth pastor for a time period, and I went back to the young youth that were troubled like myself, to help them out.

God really changed my life, you know. It was that inkling of the Holy Spirit.

I believe that it was the right timing of Him opening my heart and my mind.

And now here I am years later, I’ve moved to Asia from America, and I started doing Brazilian Jiu-Jitsu, competing and fighting. I’m a professor now, mentoring many people. I’ve hundreds of students and I’m very successful in what I do.

It was God opening the doors. I love it. It’s amazing how He can take the ashes and make something beautiful.

In one of my fights in the Pan American in 2014, I tore my shoulder trying to lift this guy, tore my own shoulder, and got through the fight.

And then after, I went and got an MRI and the doctor showed like, “Hey, you tore your labrum, you need surgery.” Now I’ve already had three shoulder surgeries from fighting. This would have been my fourth.

Then one day, here in Asia, I went to an alpha and I was the guest speaker at this church and after the alpha, some young girls came up and some people and one guy, and I don’t even remember who they were at the time, and said, “Hey, could we pray for you? We loved your message, you speaking and all that.” And I said, “Yeah”, and I was just being nice. I didn’t think much of it. And I said, “Would you pray for my shoulder? I tore it. And, you know, I’ve been getting prayed for nine months.” But I was like, “Yeah, just go ahead and pray for it.”

You know, I didn’t have much faith, nothing, but they had faith.

And they prayed for me a simple little prayer and I left the event that time. And I was downstairs and I was moving my shoulder around. Yeah, it feels like no real pain but I take Voltaren a lot, anti-inflammatory, so I thought, “You know what? I think it just took one, it usually lasts for a day or two.”

Then day after day after day, my shoulder never hurt. And I told my other friend that was teaching with me, my other Black Belt professor, and he’s a Christian as well.

I said, “Daniel, I think God healed my shoulder, bro. But I don’t want to go out and say, “Hey, God healed me.” And then later on, like, “Oh, never mind, it was … I still need surgery.” So, I waited week after week. I started training harder and harder, and guess what? It never came back. That was 2014. And so here I am, years later, in 2021. God healed my shoulder. For whatever reason, He didn’t heal the other things, whatever, many injuries.

But that day, He decided to encourage me that there is the God of healing.

If He created the heavens and the earth, of course, of course, He can heal your shoulder. And sometimes, He does. Sometimes He doesn’t. But regardless, He’s God, He’s real and He does love you.

I follow my life on one principle, and I would encourage you to maybe do the same. It’s what Jesus said, what’s the most important thing?

To follow two things. Number one, love God with all your heart, your mind, your soul, your strength. And number two is love people, love your neighbour as yourself.

And so, this is my principle. Even though I’m a fighter, I’m not hurting people. We’re having fun. It’s competitive and we’re having a great time. I’m never angry. It’s nothing like this. It’s very much like rugby or football, all that, and it’s fun. And if someone attacks me one day, I can defend my family, of course.

But I follow these principles of love; love people, love God.

And what does that mean? God says in 1 John, if you obey My commandments, that’s how you show Me love. If you believe in the Lord Jesus Christ, that’s how you show love. And how do you love people? Well, it’s like 1 Corinthians 13. Love is patient. Love is kind. It’s long-suffering. It doesn’t keep a record of wrongs. So, I follow my life on these principles, as hard as my life has been with my mom and just things that happen.

You know, there’s a lot of emotional stuff people go through. But I’m emotional because I’m just very grateful that God saved my life.

I pray that God would touch your heart as well. And life is a fight, you know, so I just encourage you to fight, fight for your life, fight for God, and fight for love. So, God bless you. I hope this encouraged somebody.