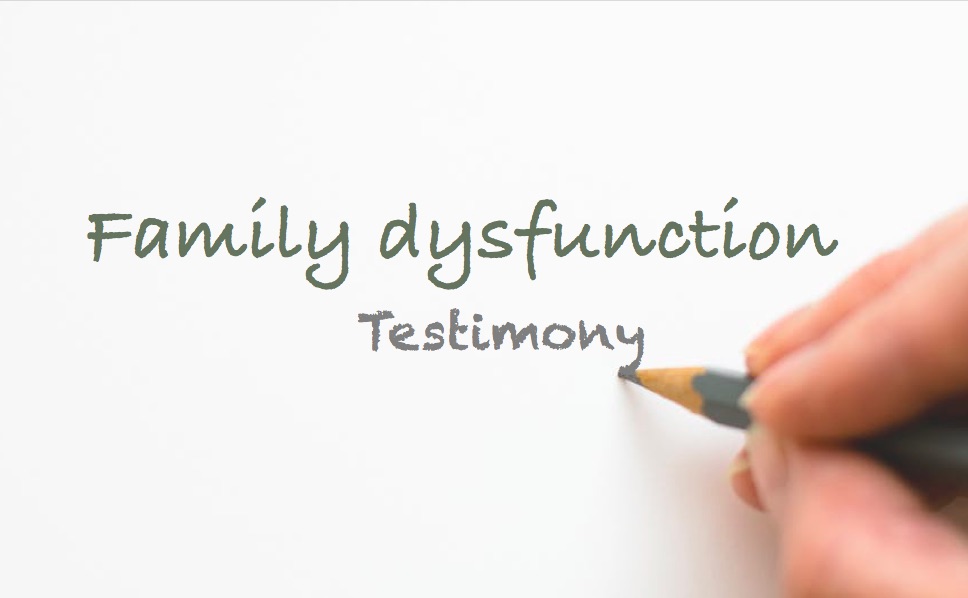 J is a professional counsellor who felt called to help others. Yet she carried a lot of bitterness and hatred, as a result of growing up in a dysfunctional family that constantly fought, worshipped idols, and practiced witchcraft. During a time of prayer, the Holy Spirit led her to recognise her judgments and relieved her of her emotional burdens as she repented. She is now able to be kinder to her parents and enjoy God’s peace. Praise God!

I grew up in a toxic, shamed-based, and dysfunctional home.

It was a home where your needs were not important and your wants were disregarded. There were no real conversations, only instructions and comparisons of my failures with other kids’ success. Most of what they talked to me about were just criticisms of how incompetent I was.

My parents, like many older Asian generations, are great at providing material goods such as food, home, education, private tutor tuition etc. But they are emotionally and mentally unavailable, and worse, shut down and absent.

My parents waged war at home. There were rarely kind words in the house.

Most of my childhood memories about my family revolve around the unending yelling, screaming, and hateful words toward each other. It was a vicious environment filled with verbal and emotional cruelty.

Because of this, I desperately wanted to run away. I became very rebellious. I hated my family and vowed to never be like my mother and to never choose a man like my father.

One of my life goals was to stay away from my family completely. I didn’t even want to show up at their funerals.

Because of my upbringing, a rebellious spirit really got hold of me. I refused to submit under any authority, and always challenged people in positions of authority. As a result, I got into so much trouble.

I hated every adult that came across my path. I viewed them as I viewed my parents – that they just wanted to criticise me and dictate everything I do. This deception hindered me from listening to wise advice from other adults who were actually wise, understanding, loving, and humble. This led me to rely on myself during my teenage years, and I often made wrong choices and destructive decisions.

The hurt and pain from a dysfunctional home left me with a bitter heart and an unforgiving spirit.

I could not forgive my parents. Inside me, there was an unspeakable, strong hatred toward them and toward my home. This unforgiveness and hatred made it so hard for me, and even for my parents, to reconcile and have a healthy relationship. All three of us held on to grudges inside us. We kept a record of the wrongs that the other person had done to us.

Because of the way they treated me, a spirit of rejection begun to have a very strong influence on my life.

No matter what I achieved, I still felt like I was not good enough.

I lived with the belief that “I am not good enough” and “will never be good enough” because my confidence was not built during the developmental stages of my life. In those years, no encouragement, no appreciation, and no recognition was ever spoken to me.

I was never heard, never understood, never valued, never good enough, and felt I was always below and under the kids whom my parents viewed as doing much better than me.

I also learned and copied some of the toxic ways of relating and communicating with others from my dysfunctional upbringing.

As a consequence, I did not have a lot of meaningful relationships. I applied the same toxic ways that my parents dealt with conflict to handle my own relationships – by blaming others, belittling others, and cutting people off whenever I faced conflict.

I wasn’t prospering in meaningful social relationships but had a lot of party buddies and drinking friends.

It was my sister who suggested that I consider prayer counselling. She texted a prayer counsellor who had helped her to explain my situation and arrange a time for me to meet her.

Later, I heard from this prayer counselor that our first contact for arranging the prayer session was already a miracle in itself.

Her phone battery was dying but it “just refused to die” during the couple of hours it took my sister to send messages back and forth with her. After hearing this, my broken heart was already so encouraged by God’s love, that He refused to let me go and leave me alone to be tormented by the emotions and thoughts that had afflicted so much pain inside me.

Before my renewal prayer, the prayer counsellor asked me to go through Love The Lord book in preparation. So I read Love The Lord book before attending the prayer counseling session. It was very helpful and it taught me how idolatry, generational sins, and personal sins are hurting and hindering me to live the life God intended for me to live fully. The book also taught me the applicable ways to love the Lord with all my heart, my soul, and my entire being.

On the day of the prayer session, we started with water baptism.

I never really had a proper water baptism from any of the churches I went to before. When I needed to say the baptism prayer, however, I wasn’t able to utter a word. I was crying and just didn’t want to say the prayer. I was in deep sorrow and deep sadness. (She later explained that this was a sign of the enemy not wanting to let me go and that she was even more convinced that I needed to be baptised. The sorrow I felt was not mine.)

After I said the baptism prayer, the deep sorrow and sadness went away. Suddenly, my mind gained clarity. My mind wasn’t as clouded as it was before.

2 Corinthians 4:4 ESV  In their case the god of this world has blinded the minds of the unbelievers, to keep them from seeing the light of the gospel of the glory of Christ, who is the image of God.

Next, we sat down for the prayer session. I remember I spent quite some time cutting ungodly soul ties. I learned that emotions and unclean spirits can transfer to me from another person. I felt like I must have carried some spirits and unhealthy emotions that weren’t from me because after renouncing the soul ties, I felt lighter, I felt more joy, I felt more peace. My mind became even more clearer after the renunciation of soul ties.

Following this, my prayer counselor told me that the blame, hate, and anger I held toward my parents had become an idol. Every day, I vowed to not become like them, and every day, I tried my best to remain cut off from them. Unknowingly they had become a “counter” idol – I thought about them more than I thought about God.

The hatred I had toward them was exalted higher than God’s position in my heart.

I couldn’t help but treat them the same way they treated me, even though I knew I should not. I just felt like I couldn’t control myself but be very critical every time I interacted with my parents. I had become just like my mother!

My prayer counselor said I needed to forgive and show my parents grace just like how God forgave me and gave me His grace.

After I prayed to forgive my parents, the freedom from the highly critical spirit wasn’t visible and evident immediately, until one day my parents were yelling and criticising me again,

I was so angry and started yelling back, but I suddenly remembered what I learned from the prayer session. So, I lifted up my hands and knelt down right away as an act of surrendering my negative emotions to God.

God instantly removed the anger from me and my parents stopped yelling. Ever since that day, I became free from reacting and responding in the same way as my parents do.

I was set free from a set of thinking and responses that I subconsciously learned and adopted from my mother.

My prayer counselor also helped me see how my parents were being controlled by evil spirits. They are also victims. This helped me to forgive, understand, and pray for their salvation and deliverance.

At the prayer session, God revealed many of the generational curses and witchcraft that had been oppressing me.

My ancestors and my mother worship so many idols and practise different occult rituals in the hope of a better life for her children and her. She has worshipped, prayed, and bought crystals, jades, fengshui objects, and many, many amulets for me since birth.

Those things brought me more harm than help.

Even when I became a Christian, I was blinded and deceived into believing that these kinds of lucky charm and witchcraft objects have no power over me.

I would accept them and even carry them in my purse. I was fooled.

God showed me how those objects had negatively influenced me, and how they manifested in my life, such as through negative emotions and destructive relationships etc. At the session, we revoked all contracts, all associations that I ever agreed with Satan.

Afterward, I felt even lighter. My depression was gone. I’m now less anxious about the future. I don’t always fall asleep during sermons anymore.

There were so many obstacles for me to live a godly and healthy life. These were removed instantly. I felt different and most importantly, I became emotionally and mentally healthier. I am now at a much healthier place until today.

At the prayer session, I was constantly reminded that God is my Parent. Now, I don’t look to my parents to be my parents anymore. I don’t feel disappointed or question why I don’t receive love and encouragement from them.

I was set free, and the change also set my parents free from my unrealistic expectations.

They no longer had to face the highly critical me who often responded to them with a bitter attitude and angry words.

Of course, there come times I’m tempted to feel disappointed with my parents, but I am always able to pull myself away from the temptation and go back to say to my heart that God is my Parent. I am not an orphan and I am well taken care of. I look up to my Heavenly Father for perfect love, and that kind of Godly love has filled me and helped me to be able to love and accept my parents.