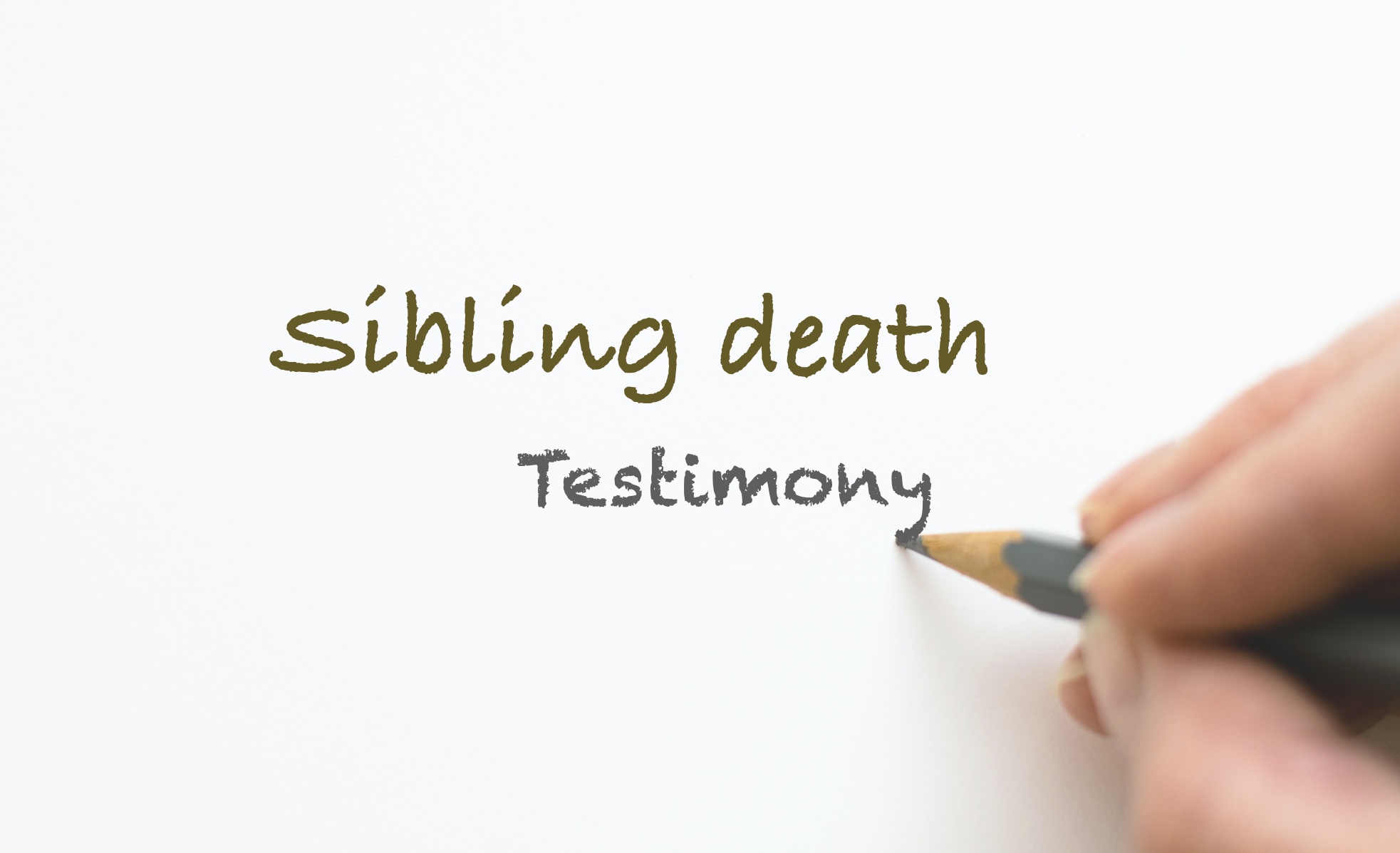 T had been climbing up the corporate ladder but hid a heart filled with sorrow, rather than hope, joy, and peace. During a time of humility in prayer before God, the Holy Spirit revealed to T the root to her lifelong sorrow – and the sin that kept her trapped there. As she forgave and repented of judging those who had hurt her, her sorrow lifted. Praise God!

It is amazing how our hearts can remember flashes of memories and fragments of our life reminisced, even the deeply buried ones.

Some are triggered and brought up to the surface by emotions we have experienced at least once during similar events before.

For the longest time, I thought I had managed to escape so many of the terrible experiences of my childhood growing up. I pursued hard to overcome the past that I had wanted to forget.

From the outset of my life, there has always been a lingering grief that hovered throughout: the failed relationships, the falling out of once seemingly close relationships, and even in the one place I thought I could not fail — in my job.

My career became a soul-destroying never-ending exhaustion of pursuing title after title that only resulted in more emptiness.

On the outside I appeared well-put together – I was busy managing my whole life, seizing every opportunity, and mitigating every situation so it wouldn’t result in a bad outcome.

I had developed the most effective and productive coping mechanism. I handled it so well that I would always come out a survivor, defending every attack by building walls to protect myself. But the truth was that I was hurting a lot.

Whilst I was living in a mode of constant alertness and defence, I could never truly be myself.

It was only until I started my journey back to God, proclaiming that my life belonged to my Lord and Saviour, Jesus Christ, that I could open the door to experiencing the full and complete healing of my heart.

As I drew closer to God, it became more apparent that the way I had been living my life was in reaction to what had happened to me in my childhood. There were many events that made no sense to a child, that had no appropriate explanation. No adult ever sat down with me to explain anything because they themselves didn’t understand what was going on in their own wounded hearts.

God graciously wanted to set me free from this wounding, with the help of sisters-in-Christ who had also been walking on the same path. For the first time, I realised I was not alone – this place of brokenness, isolation, relying on my own coping mechanism to make sense of all the hurt through a bitter and judging lens. We all had some iteration of the same type of wounding.

The truth was that God was always ready to take away my pain.

But I had to be willing to submit and deal with the wounds that I had been trying to escape from all my life – beginning in where it all began, in the womb.

Through prayer and revelation, the Holy Spirit brought to light the grief that was always hovering over my life, that had begun when I was still in my mother’s womb.

I was five when I found out when my family was paying respects to my deceased paternal grandfather and great-grandmother that there was also a little baby girl who had passed away, she was my older sister.

My sibling told me that she had passed away in her sleep. I was conceived during this time of grief.

When I was born into the world, I had somehow felt like I wasn’t welcomed or wanted. The loss of my sister and the grief or guilt that both my parents carried had transmuted over to my life even before I was born.

I had somehow determined that I was not worthy to be here and that I had to make up for it by not burdening my family and others. My role was to do everything in my power to sacrifice my life for my family for what they had lost. I would have to find a way to redeem their guilt.

Because I was able to be alive and well, I had to make up for the loss of my sister who simply didn’t have the chance.

To break this powerful bondage from the womb that had claimed so much of my life, I had to pray to God and ask for forgiveness for my mother who, in her own grief, had unknowingly passed on her feelings to me. I prayed to cut all spiritual ties that had led me to take up this yoke.

God revealed the truth that my family’s pain and burden was never mine to carry, it is and will always be His. Also, that my life is worthy, because I am a child of God; and the only sacrifice I am meant to make is to be a living sacrifice to God, not for my family or anyone else.

Therefore I urge you, brothers and sisters, by the mercies of God, to present your bodies [dedicating all of yourselves, set apart] as a living sacrifice, holy and well-pleasing to God, which is your rational (logical, intelligent) act of worship. (Romans 12:1 AMP)

I also had to ask for forgiveness from God for wanting to replace or trade my life for my sister’s, for saying that my life was not worthy.

All these thoughts that had been with me since my inception were not from God.

Once I had repented, the Holy Spirit revealed how my Heavenly Father saw me, that my life was a joyful gift that He celebrates and treasures. The gift He promised me was that He would be with me for the rest of my life — He will walk with me, bless me and use me as a blessing to His kingdom.

Behold, children are a heritage and gift from the Lord, The fruit of the womb a reward. (Psalm 127:3 AMP)

My heart suddenly felt light after the prayer.

One of the sisters praying with me also revealed that God has given me a sword to use, so when the lies come back to try and tempt me to believe otherwise, I can defeat the lies with His Word.

And take the helmet of salvation, and the sword of the Spirit, which is the Word of God. (Ephesians 6:17 AMP)

The other wounds that Holy Spirit wanted to free me from during the prayer session were with each family member, and this required for me to humble myself, to be willing to submit all the deepest hurts that I was still holding onto more than wanting to surrender them all to God – all these were separating me from Him.

Because I felt unworthy of my mother’s love and affection from as early as the womb – I always tried to please them without ever truly succeeding. This reinforced my fear of abandonment.

It also instilled a fear that the more I tried to please my mother, the more she tried to punish and control me. Her often cold and vitriol actions would eventually cause me to seek to rebel against the seemingly “unfair” and “unjust” outcome of being alive instead of my sister.

This dynamic unbeknownst to myself played out in similar situations whenever the same wounding was triggered.

A most recent example was my workplace, where dealing with older women in authority triggered my unhealed wounds with my own mother.

To deal with the wound, I had to confront all the pain that my mother had subjected me to. As I tried to pray, nothing initially came out, it was stuck inside. A sister-in-Christ asked the Holy Spirit to help me to connect all the pathways of my blocked heart, my mind, body, soul and spirit to recall even the deepest memory that was buried inside.

As I recounted and named all that my mother did to me out loud, I let out many un-cried tears from the wounds inside my heart that no one had ever comforted. There were memories of being locked outside of our home and crying to be let in, of being never good enough, of being the way I simply was etc. All these could no longer be locked away in the darkness of my heart.

My reaction to my own mother’s wounding had been left unchecked for a very long time.

These had festered and amounted to sinful reactions and choices of my own that had to bear their own consequences.

Personally, I had judged my mother, resented her, cursed her, and blamed her character and mothering. All these judgments became so deeply rooted that they had became part of my heart and would often play out in other situations, once similarly provoked or triggered, resulting in other people judging me for my own behaviour.

One of God’s laws is, “Do not judge and criticise and condemn [others unfairly with an attitude of self-righteous superiority as though assuming the office of a judge], so that you will not be judged [unfairly]. For just as you [hypocritically] judge others [when you are sinful and repentant], so you will be judged; and in accordance with your standard of measure [used to pass out judgment], judgement will be measured to you” (Matthew 7:1-2 AMP)

I had to make a choice – to continue to hold onto my bitterness and judgments and reap the consequences of my own sinful actions or turn my heart back towards my Heavenly Father and repent.

I chose, for the first time in my life to forgive my own mother for all that she intentionally/ unintentionally inflicted on me.

I also had to repent for my own sinful heart for judging her, even though she had hurt me, and ask for forgiveness from God for hurting Him in this way, and ultimately judging Him as the Heavenly Father of my mother.

One by one, I repeated the same process with my dad and brothers, to cleanse my heart from wounds inflicted by each family member and to repent for my own sinful reaction to judge, curse and condemn the character that God had blessed them with. All these judgements only brought about self-righteous and prideful behaviour in me, resulting in years and years of bitterness and further wounding, when I could have turned my heart back to God to deal with my own wounded heart sooner.

After praying, my heart felt so light – and it was as though a huge weight had been lifted off my chest, the literal weight of sin.

For my iniquities have gone over my head [like the waves of a flood]; As a heavy burden they weigh too much for me. (PSALM 38:4 AMP)

I praise God for loving me so much, for His grace to patiently wait till I was ready to deal with these wounds. He had pursued me to set me free from the bondage. As I navigate my life now through a new perspective, one that seems to have a more steadfast weight. I realise I no longer feel insecure about my life or the path that I am on.

That grief that had been following me around all my life is no longer there.

Each day, as I settle into this new-newness, I find myself rooted deeper in His peace and the path that He has set me on to live the life that He has always wanted for me, in greater freedom in Christ.