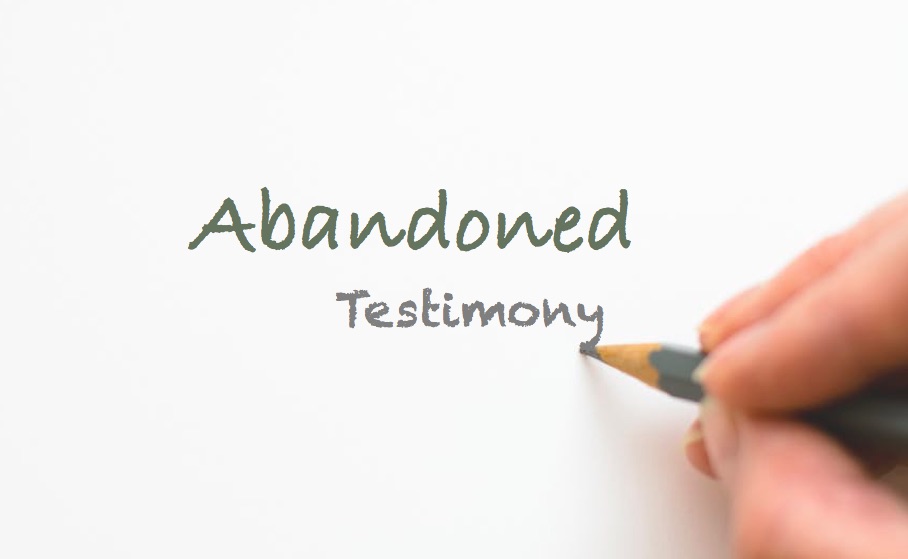 A is a teacher who had struggled to control her rage in class. She felt unloved by her dad and unworthy of intimacy with God. Here is her story of how she was set free from lies about her father’s love for her and deep-rooted OCD tendencies. Praise God!

For years, I suffered from uncontrollable anger.

Growing up in South Africa, I was always keenly aware how extroverted and sociable I was in relation to my two sisters. Coupled with the ʻmiddle-childʼ complex, insecurities brought about by wanting to be more like them and suppressing myself, I would condemn myself.

This was solidified when one day, my dad returned from a trip to Thailand with a gold pendant with a goddess, with many arms, seated on a lotus leaf for me. He said I was to wear this to calm me down.

I never knew quite how to relate to him. I wasn’t particularly academically adept, was always more vocal and so forth. I always felt that I caused my dad the most trouble and inconvenience, and that somehow, he loved me the least, and that I had to earn his love and approval. I was also told that while in the womb, my parents were expecting me to be a boy.

I would grow up to see and label myself as the ʻblack sheepʼ of the family.

When I was fourteen, my family immigrated to Hong Kong with me choosing to stay behind to complete my schooling in South Africa. Slowly however, I began to feel “left behind”. South Africa’s unsafe conditions would also instil a lot of fear in me. This would later manifest itself in a mild form of Obsessive-Compulsive Disorder (OCD), with my constant checking and re-checking, repeatedly, that I had locked the doors, shut the windows, turned off the air-conditioning etc.

It was also that year that I accepted Christ into my life. In my view, God was a wrathful God who was to be feared. He would punish disobedience. I remember getting baptized but the significance of that event did not hold weight. Life was no different – there was no change in my attitude, outlook or values. Life became a series of partying and just living for the next thrill. I did not see a need for God nor did I have the time for Him.

And then my world fell apart when a relationship ended and I found myself angry at God. It was at this point that I began going to church again, begrudgingly at first, but slowly and surely, God melted my hardened heart and revealed His loving and caring side.

When I left South Africa after university and joined my family in Hong Kong, I began serving at church and attending a small prayer meeting with other ladies.

During prayer one day, a friend said she pictured me outside the door of the banquet room, seated in a servant-like position.

God was at the table in a feast, calling me to come in to join Him. She quietly asked if it meant anything to me. I began shakily. “I’ve always been too afraid to approach and ask God for things, perhaps not wanting to bother Him… Um, I suppose like it is with my dad.” I’d been having difficulty admitting it for quite some time – and only the Lord would have known the way I felt.

And then the Lord, through a renewal prayer session later, unveiled my distorted perspective and co-operation, knowingly and unknowingly, with the enemy. Believing Satan’s lies and accusations had influenced my thoughts and subsequent behaviour.

Revelation. My dad has always loved me.

My dad’s choice to honour and respect my decision to stay in South Africa was the biggest act of love. He put aside his will, took upon the inconvenience and made sure all was in order, so I was taken care of and provided for. He must have also recognized a strength that I was not aware of at the time, in order for him to agree and allow me to stay back. Instead, I fell for the lies in my head that my dad had preferred my sisters.

My dad had given me my name but I never liked it. I chose to use another name instead. The prayer counsellors helped me see that my dad had chosen a name for me that meant ‘angel’ – and that he had given me everything I had asked for. He had granted my desires at his own expense.

All this time, I was blinded into believing that he didn’t love me.

A sudden wave of love, gratitude and despair filled me, as I came to terms with my misaligned view of our relationship, and how I had misunderstood his love all these years.

The prayer counselors comforted me by reminding me that Godʼs redemptive purposes would prevail. I sensed God wanting me to reconcile with my dad – to apologize, acknowledge and thank him for all heʼs done. I also wanted to hug him and tell him I love him.

My doubting and questioning of my dadʼs love and affection for me, and hence, my not wanting to ask or not daring to expect, mirrored that of what I perceived of my Father in Heaven. Matthew 7: 9-11 came to life. “Which of you, if your son asks for bread, will give him a stone? Or if he asks for a fish, will give him a snake? If you, then, …know how to give good gifts to your children, how much more will your Father in heaven give good gifts to those who ask him!”

For the first time, I truly understood His perfect love.

With the prompting of the Spirit, the ladies also helped me to renounce and cut all ties with the goddess pendant and its demonic ties. We also prayed and rebuked the spirit of fear to leave, and for the Holy Spirit to fill and reside in all that was previously inhabited by this stronghold.

The urge to obsessively and repeatedly check things has gone.

And then, one of the prayer counsellors asked if I liked to dance. I nodded yes. She then told me that God was inviting me to dance with Him. She suggested that I picture myself dancing with Him – and there I was, doing the two-step with the Lord, and then He was twirling me around!

Soon, I broke into laughter. Uncontrollable, joyful laughter. The kind of laughter that brings tears to your eyes.

It also suddenly became clear that the root of my uncontrollable anger in the classroom was my pride being hurt because of unmet expectations, starting early in childhood.

The fact that I felt I had to “earn” my dadʼs love through performance led me to do the same with my students! I found myself only encouraging and complimenting only students who had done what I had required. Oh, the irony.

The prayer counsellors lovingly reminded me that there is so much opportunity in the classroom, to represent Him, to be a conduit of love and grace and forgiveness.

They suggested that I say a quick prayer every time I make my way to class and visualise Jesus in my classroom.

Inviting Jesus into my classroom and following His lead has empowered me, and the lashing out in a fit of uncontrollable rage at my students has ceased. Not to say I don’t still struggle, but picturing Him in sitting there among my students is certainly helping. Praise the Lord!

God is such a gentleman, so careful and gentle with our fragile and delicate hearts. He is loving yet firm, as He sifts and prunes. Always knowing the state and condition of our hearts – our readiness and teachability; always having our best interests in mind; desiring us to truly know and be loved by Him, and to love Him in return.