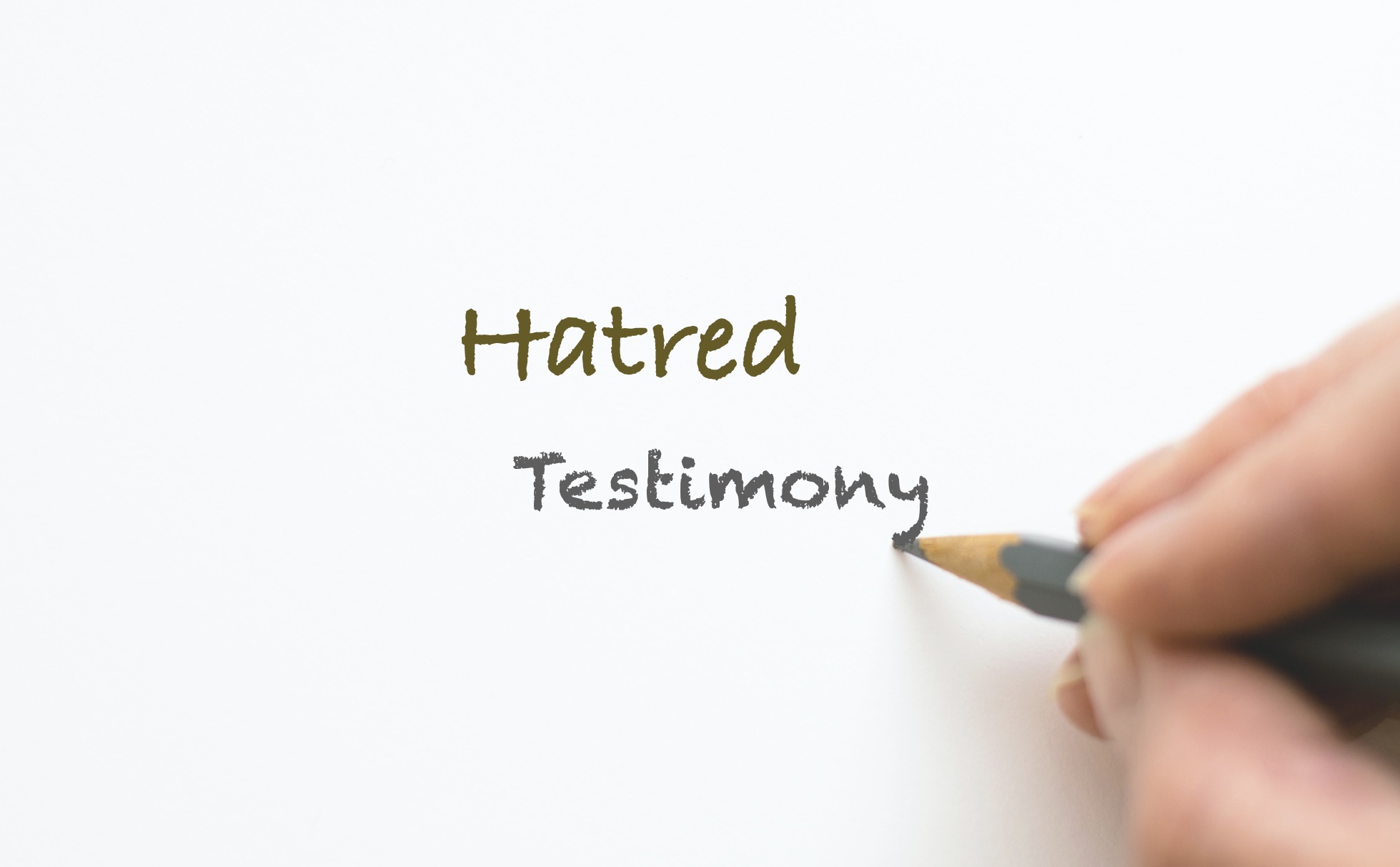 L struggled with hatred towards her mother for all the cruel things she had done, including manipulating her into hating her own father and sister. As she humbled herself before God, the Holy Spirit led her on a journey of revelation, repentance, and greater compassion towards those in her own family whom she once hated. Praise God!

My mother had always been my closest friend (I thought) and my closest ally when I was growing up.

I thought it was “us against the world”, which basically meant us against my dad and my sister who were abusive, bullying, and controlling towards us. I vowed to be successful and to make enough money in order to return to rescue my mother from my monster dad (that’s what I thought) and to put a restraining order from my mom on him.

How naïve I have been! I first started to discover my mum’s lies and betrayals when I was 18. I couldn’t believe what I saw when I found her sex texts with another man in her phone and other flirting occasions with different men, while she used me as a shield and excuse to lie to my dad for her. She would pretend that she was sleeping when she was actually doing these things behind our backs.

My mother would always use the victim card to manipulate me to lie to my dad for her so she could go out and have fun with these men.

I thought she was trying to have harmless fun with her female friends but later, as I pieced the puzzle together, the truth slowly unfolded that she had always been flirting with different men behind my back.

My mother’s image as my hero was crushed. (She had played the roles of both my mum and dad as my dad was always absent.) I unfolded more truths about her gambling and shopping addictions, and her manipulative ways of guilt-tripping others, including my uncle. She lied to me about how my sister had used up her money and hence she had to turn to maximising her credit cards but was unable to repay.

She threatened suicide to ask for help in settling her credit card debts.

Finding all this out took a toll on me. I couldn’t believe that she had used me as a threat to push my uncle into sending money over to help her with her debts – more than once. She also took the money that was meant to be sent to me to support my studies in the UK without caring if I was starving or not. I lost 8kg within 2 months that year, due to a lack of money for food while I was studying abroad.

Something inside of me died and I began to harden my heart unconsciously.

Though I vowed to not let anyone hurt me again, my heart still had this deep sense of wanting to belong. I fell in and out of toxic relationships and friendships to fill up that hole in my heart.

I started hating my mother over time. That ate me up inside instead — on top of the hatred I already felt towards my dad and my sister. I became so angry that anything small could make me flip. Sometimes, I would be angry over nothing, furious to a point where I could barely breathe.

I also realised that my mother has been the culprit who manipulated me into hating both my dad and my sister for her own selfish gain – attention.

She does not know what love is as a mother. She just knows how to get rid of anyone or anything which is a problem to her — including her own daughters.

When my sister was battling with her drug addiction and self-harm issues, my mother tried to encourage her to ‘cut deeper’ or ‘to just have enough courage to jump down the building’. That made me harbour further hatred towards my mom over the years.

One thing led to another. I felt like I was the victim of the world – my fiancé betrayed me and cheated on me with my best friend. I moved countries to marry him but realised I got laid off on top of losing the marriage.

I was constantly contemplating suicide but God was faithful to me even when I wasn’t.

God repeatedly sent help to me and now that I look back, I can see that God was always at my door knocking but I wasn’t answering. I was still reliant on my own strength, refusing to trust anyone else but myself, as this has become my coping mechanism after my mother’s great betrayal unravelled.

I was such a bitter soul that negativity and depression constantly spit out of my mouth and seeped through my actions. This was so apparent that many new friends started avoiding me, deleting me from their social media — which dragged me down even further to my fear of abandonment. Even my closest friends, who love me and tried to be there for me, couldn’t deal with my self-destructive patterns.

They felt that I was constantly attacking them but the truth is, I was mainly judging myself.

I have had my closest friends and family tell me that they had to take a step back from supporting me, as they felt helpless and hurt by my words and actions towards them.

I now realised that I was exactly where Satan had wanted me to be – alone, disconnected, disoriented and merciless, which was his biggest winning strategy as mercy is my top spiritual gift.

Soon enough, I became the best con-artist in town too. No one could tell that I have had such a rough past as I have begun to lie to myself, just so that I could numb the pain and act like I was just like everybody else who had normal families and normal lives – so I won’t be abandoned or judged anymore.

I became a people pleaser, always telling others what I think they would want to hear rather than what the truth is.

I became so used to lying that it was abnormal to speak my mind or the truth. I had become my mom.

I had previously gone through renewal prayer. In my first prayer session, I addressed all the spiritual strongholds that were tying me to my addiction towards my ex-fiancé but I never actually dealt with the mother wounds that I had buried so deep inside me.

I was able to kick my emotionally abusive and manipulative ex-boyfriend out from my life, once and for all, but I was still harbouring hatred towards my emotionally abusive and manipulative mother. This resulted in a very hardened heart. Given that mercy is supposed to be my top spiritual gift, I found myself feeling emotionless towards almost everything – I was like a walking zombie. I became judgmental and cold hearted, almost numb to other people’s sufferings.

Although I was no longer sad, I was unable to feel joy or happiness as well.

At the same time, I did not think that God intended for me to be happy as I was attending weddings almost weekly and hearing everyone around me talking about starting their families. Even when I had given up on God’s plans for me, God did not give up on me.

He was working behind the scenes while I was constantly battling with disbelief towards Him. He showed a vision to my prayer counsellor where I was with a tall husband, looking happy with two children. Deep inside, I had a good laugh and decided to shrug it off as I couldn’t believe that someone so broken (like me) and someone so spent (used by my ex) would deserve any love.

I thought that all the events that took place in my life in the last 30-odd years had confirmed that I am unworthy of love and that love has to be conditional.

So when I first met my current (very tall) fiancé, I refused to believe that he was genuine. I thought he was using me as a commodity, so I assumed that it was a transactional love where he needed me to fill up the gap of his loneliness right after his break-up with his long-term girlfriend.

I did not realise that my hatred and unforgiveness towards my mother was eating me up inside and that I have allowed Satan to 1) take away the relationship with my mother, 2) portray a very bad example of Christ to my non-Christian family and 3) push away people who truly care about and love me deeply.

After my second renewal prayer, I have come to understand that my mother herself has been tied to her bondages to all sorts of fears and insecurities all her life –  as a result of all the occult practices that she’s done and those that have been done upon her all these years.

My mom lives in a world of lies and that is sadly, her reality.

Satan had also ensured that I couldn’t use my top spiritual gift to have mercy upon my family members who have been searching and yearning for unconditional love all their lives.

I was completely blinded and I was ashamed to see that my mother had stayed on, even when I have attacked and slandered her with abusive words and abandoned her by cutting ties with her. I was beyond devastated to know that I have hurt my own mother and ashamed that a non-believer could show mercy towards me unconditionally when I should be the one showing mercy towards them.

I failed as a daughter, a partner and a sister on all different levels.

I confessed and repented of my hatred towards my mum but I am still on my way to forgiveness as my heart has hardened tremendously over the years.

It was also during the prayer session where one of the prayer counsellors saw the word ‘prostitution’. It was a spiritual tie that we prayed to break as I recalled having thoughts of wanting to be a prostitute as soon as I turned 18 or I may just prostitute myself to be some older men’s mistress, because I did not value myself. I was happy being someone’s second option. The Holy Spirit also prompted me to recall that back in my hometown, I have a grand-aunt who used to run a brothel and she tried to prostitute my grandmother when she ran out of ‘girls’ to send out for the day. We prayed together to break any soul ties with her. This was one of the generational curses that plagued our family.

I am still on my journey towards healing and I have grown to sympathise with my sister – one person whom I’ve hated since I was four.

I no longer hate my dad but I struggle with building any relationship with him as we never even had the chance to communicate properly with and listen to one another all our lives – it is not something that comes naturally to me.

Now, my sister and I can have a normal conversation (albeit not often) and my dad and I no longer hate each other to a point where we cannot see eye to eye. I have grown to empathise with these two that they were probably born into families where Satan has cursed their first child – a curse I’d like to bring it to Jesus to break free from one day.